Running is a big dumb jerk

Chicken butt, yes. And also...
Running is kind of a big jerk. If running was an actual person, I probably wouldn't want to be his or her friend.
Running is passive-aggressive.
Running uses painful things just as shin splints to tell you when you need new sneakers. It's like when your brother would punch you in the arm instead of saying "hi" or to get your attention. Shin splints are totally unnecessary and rude.  When you didn't eat or hydrate enough before a run, it will make you struggle. If running is really mad, you'll end up passing out.
Running is horribly inconvenient. I would not mind running in the morning if it wasn't so darn early. It is very presumptive to expect a person to be out of bed, dressed, and ready by 5:45 a.m. You have to run all the damn time too. Weekends are for long runs, Wednesdays are for speedwork. Year round too. You have to run in the icy depths of winter and the high heats of summer. 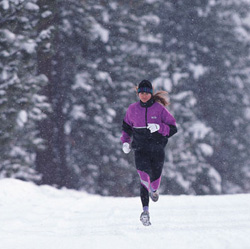 Running is your socially awkward friend who no one likes.
Not everyone 'gets' running, so you have to spend a lot of time explaining it. Running, in this case, is like that person you're forced to be friends with because your moms are friends. She hangs out with your friends and somehow manages to alienate, annoy, or irritate everyone in the group and you have to apologize or explain her to everyone later: yeah, that's running.
"No really, she just doesn't hang out with people alot. She didn't know you liked him!"
"Yes, I run even if no one is chasing me." Running is high-maintenance and demanding.
You cannot half-ass a relationship with running. It gets very angry when you do and won't show you the results you wanted and avenges with pain. I half-assed my training for the 2011 Gasparilla Ultra Weekend and I paid a very sore, nauseous, sweaty price. It goes back to the passive-aggressive running. 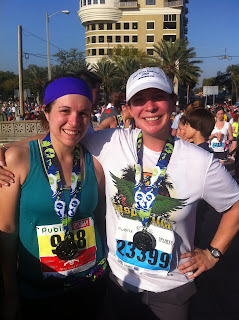 If running was a girl, it would surely be on a Real Housewives series. It's an expensive hobby to maintain, it never stops up, and no one quite understands why it's popular.

Running is a Squatter.
Once you start with running, it's hard to stop. Running is that person who said you'd give a ride to for a week while their car is the shop and then you end up waiting for him every morning for a year. I started with running three miles a few times a week. And then it wanted me to run further and more often. And then it wanted me to run a 10 miler, then a half marathon and now a marathon. It's really greedy.
Running is confusing.
Running can make you gain weight. Running hurts but you crave it. You can never count on running. You may have trained, you may have eaten right, stretched and gotten to bed early. And then you may have a crappy race. Or you may have drank the night before, barely trained and not really have wanted to run and you'll set a PR.
I'm about to face an inevitably sucky run. I will sweat from every pore of my body before my Garmin clocks 1.0 mile. My legs will hurt, my stomach will rumble and there will be some other mysterious pain or problem. And I'll do it all again tomorrow. Because while running is a big jerk, I love it.
How about you? How was running abused you? Let's talk some trash on running.
Posted by Righteous Runner at 7:19 PM

Who IS this girl?

Righteous Runner
Despite the grammatical errors and typos, I'm actually an editor and client relations specialist for a publishing company. I live in the suburbs of Philadelphia, but grew up around Lancaster County, Pa. This blog is my attempt to get the sometimes silly, sometimes motivational, sometimes funny, sometimes spelled correctly but always crazy thoughts that blow through my mind while I convince myself I'm a runner.